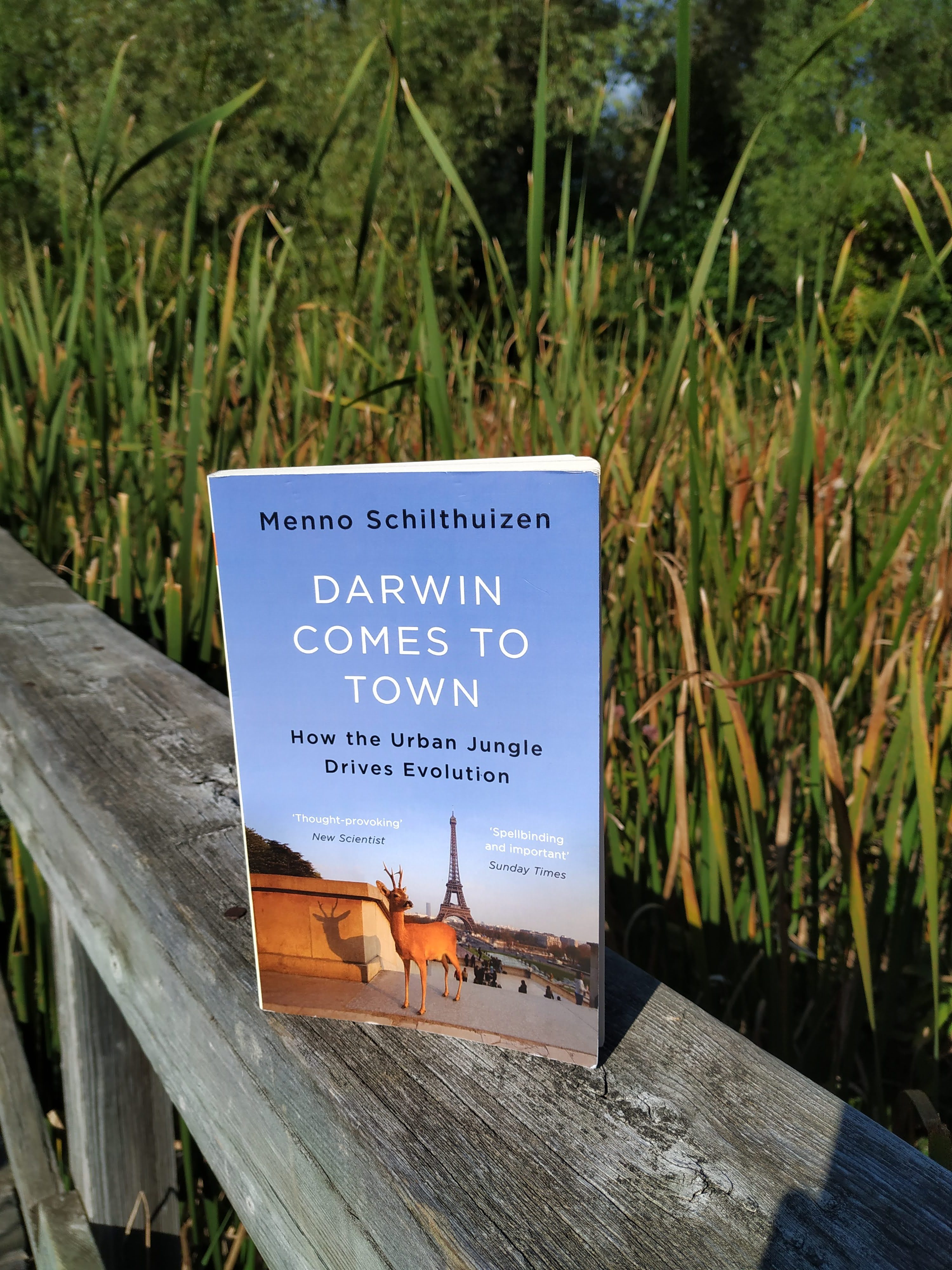 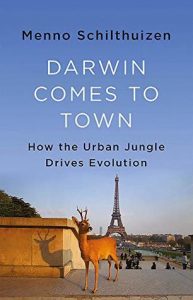 As Stonecrop Review attests, nature is here, it’s in our cities, and it’s not going anywhere. Darwin Comes to Town offers a fresh look at nature in the city by focusing in on evolution; in particular, Schilthuizen looks at the impact of cities on the evolution of non-human animals and plants (while tantalizingly touching on the possibility that cities may also be driving human evolution in new ways).

Schilthuizen has collected together many fascinating examples of urban evolution in this book and his accessible style has you racing through the short chapters. His stories range from the mosquitoes of the London Underground, to Montpellier’s hawksbeards, via San Diego’s dark-eyed juncos, which are selecting for less macho mates, because who needs all that testosterone when there’s an abundant supply of food?

Throughout the book Schilthuizen slowly builds the case for urban evolution. However, perhaps the part of the book that fascinated me most came at the end. After all, I was already sold on the idea that cities are directing evolution in new and strange ways. In the last two chapters of the book, Schilthuizen looks at how urban planning can actually take evolution into account.

Firstly, Schilthuizen looks at what he calls the global homogenization of urban ecosystems— the increasing tendency for urban ecosystems to look alike. The process of homogenization was set in motion centuries ago, when humans started moving plants and animals around the planet. Schilthuizen gives an example that is, for him, close to home. He lives in the city of Leiden, in the Netherlands, which was once also home to the botanist and Japanologist Philipp Franz von Siebold. During a period when Japan was largely cut off from the rest of the world, Siebold spent 6 years in the country. He collected many botanical samples and eventually brought them back to the Netherlands with him. Most famous among these samples is the Japanese knotweed, a plant that is now considered highly invasive in Europe, North America, and New Zealand, and which owes its presence there to Siebold. On a present day walk in the Japanese city of Sendai, Schilthuizen notes many of the same plants, birds and insects that he sees on his walks around Leiden.

Given this level of homogenization, Schilthuizen spells out his vision of a future in which urban ecosystems are:

[D]ispersed ecosystem, inhabited by a dynamic but shared set of organisms that is constantly evolving, exchanging species and genes and innovations to deal with the new technologies with which humans equip their cities.

These new technologies are also becoming increasingly homogenized across cities, from transportation, to architecture, to green planning. Urban scientist Marina Alberti refers to this as ‘telecoupling’. This technological telecoupling will also have an impact on urban evolution. One example that Schilthjuizen gives is lighting. Urban lighting has shifted over time from gas lighting to incandescent lamps to sodium and now LEDs. These changes have spread across the globe and with each change comes a new pressure on nocturnal urban animals and insects to adapt. As these technological changes spread from city to city, so too will the evolutionary changes required to adapt (though in some cases the same solution to the problem may be developed completely independently in separate locations).

While telecoupling might lead to similar evolutionary solutions across the globe, Schilthuizen believes we can go further, by activity supporting urban evolution. He spells out four principles that will lead to truly Darwinian urban nature planning. These are: Let it grow, Not Necessarily Native, Pristine Pockets, and Splendid Isolation. What Schilthuizen is proposing here goes against many of the principles that currently drive urban green planning and conservation.

Firstly, he is proposing that urban planners and architects refrain from carefully curating and selecting the plants they use in green spaces. Instead, Schilthuizen thinks these spaces should be left bare (even, in some cases, without soil), allowing the many plants that are already in the city to naturally seed them. Afterall, these plants have already been co-evolving together for many years and have developed adaptations to their environment, so they will stand a better chance of surviving than a glitzy array of newly introduced plants. One can imagine the look on the face of the award winning architect as his green roof is transformed into a very brown, barren looking roof that will take years to come to fruition. But then, good things come to those who wait…

Secondly, Schilthuizen is proposing that urban green spaces are not only self-seeded, but that urban planners shouldn’t sweat it so much when it comes to the exotic species that exist in our cities. Despite the fact that exotic species have been vilified, Schilthuizen believes we have to face up to the fact that they are often the plants that have been most successful at adapting to urban life:

It is those ecological supertramps, those citizens of the world that will make up the bulk of that globalized urban ecosystem, and urban planners could do worse than yield to that inconvenient truth of urban evolution.

However, Schilthuizen does think we should do everything we can to protect and retain pockets of pristine green areas within the city, areas that are still home to the local flora and fauna—this is his third principle: Pristine Pockets. The reasoning behind preserving these areas, however, differs from the usual conservationist’s narrative about the importance of pristine nature. These pristine pockets, Schilthuizen argues, are vital as they provide urban species with a pool of genes to draw from when tackling new challenges in their environment.

Lastly, Schilthuizen argues against the notion of connecting green spaces in the city (the increasingly popular greenways popping up in cities come to mind). While there are sound reasons for creating these green corridors—if a species disappears from one green area, that area can be replenished by the other green spaces it is connected to—there are also good reasons to keep green spaces isolated.

To illustrate why, Schilthuizen explores the example of New York’s white-footed mice. While New York would have once been covered in forests and meadows—ideal white-footed mouse territory—over the last few centuries those green spaces have become increasingly isolated, leaving white-footed mice populations scattered across New York’s parks. The mice are actually doing quite well, since there aren’t really any animals that eat or compete with them in these parks. Zoologist Jason Munchi-South mapped the DNA of New York City’s park mice and found that the centuries of increasing isolation have led to each park’s population evolving distinct DNA. This is usually viewed as dangerous by biologists, since smaller populations lead to inbreeding and reduced genetic variation or “genetic drift”. If a disease enters the population, this lack of variability reduces the ability of the population to adapt. However, in the case of the white-footed mice there doesn’t seem to have been any ill-effects from inbreeding or genetic drift. In fact, Munshi-South’s research showed that the mice have developed adaptations that may well help them to survive in their particular park. For example, Central Park mice had genes that help neutralize a toxic fungus found on mouldy nuts and seeds, as well as genes that help deal with high-fat diets. In other words, they have adapted to a diet of discarded snacks and junk food.

The Darwinian city will forgo green roofs in favour of brown roofs. It will be much more accepting of exotic species (and probably save quite a bit of money on extirpation efforts), and ‘greenway’ will no longer be the trendy buzzword it has become. All the while, animals, plants and insects that were there long before the city took hold, will live on in wild pockets, fertile with unknown evolutionary quirks. Personally, I’m excited to see where Schilthuizen’s ideas could lead and to witness the evolution of the Darwinian city.